Potential for a New Kind of “Empty Space”

“I urge young researchers to step up, claim a new field, and announce it to the world. Open an unexplored area of research and challenge others to join in. You may feel the exhilaration of a pioneer watching the growth of a new frontier.” Such is the advice of iCeMS Director Susumu Kitagawa, who himself opened a new frontier in materials science with the development of next-generation porous materials. Although now widely recognized as a field with high potential, when Kitagawa first published his work on porous materials, he was seen as a maverick. On a hunch, he took a new direction that interested him, and he found a gold mine.

To date, there are about 9,000 papers regarding porous materials published each year, many dealing with transition metal ions. When Kitagawa started his work, Cu+ was regarded as a completely insignificant ion. There are two types of charged copper ions, a +1 charged ion, Cu+, and an oxydized form of +2 charged ion, Cu+2. At that time, Cu+2 was amply researched, but no one took no notice of the Cu+ ion. Both colorless and non-magnetic, it was seemingly without utility. 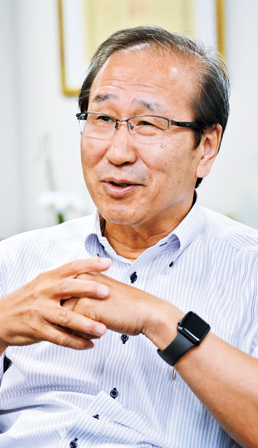 Photomicrograph of a porous coordination polymer crystal, published in 2014. Viewed on the nanometer level, the structure resembles that of a bamboo basket. It can be used to separate carbon monoxide out of a mixture of carbon monoxide and nitrogen, a task otherwise extremely difficult.

The “Insignificant Ion” that Astonished the World

After completing graduate work in quantum chemistry at Kyoto University, Kitagawa joined the science faculty of Kindai University as an assistant professor. “That is where I encountered coordination chemistry and started studying the coordination polymers that are constructed from organic ligands and metal ions.” Materials that are constructed from organic ligands and metal ions have long been investigated for their electrical conductivity, which can enable a wide range of applications as nanometer-sized wires and electrocatalysts. It was an area that drew many competing researchers.
The metal ion that attracted Kitagawa’s attention was Cu+, which exhibits a spherical electron configuration. While the Cu+2 ion binds to organic ligands to give a directionally extended structure, the Cu+ ion can form three-dimensionally extended structure. Because of its spherical electron configuration, it readily forms crystals with minimal distortion. “I realized that when Cu+ ions are bound to organic molecules, they provide a regular, continuous crystal. I thought this must be useful, so I kept studying it. However, the different electronic structures of metal ions and organic molecules hardly made electron conducting band structures. I kept racking my brain, but I couldn’t get the results I was hoping for.”

The turning point came in 1989. Together with two Kindai University students, Kitagawa visited Kyoto University, where a large computer for X-ray structure analysis of single crystals was made available. They input the X-ray diffraction data obtained for a coordination polymer crystal and then waited for modeling and simulating the structure. “Many researchers were using the computer at the same time, so the process took more than an hour until we get our result. If we had been part of Kyoto University, we could have gone back to our own lab and done some other work, but as visitors we had nowhere in particular to go. We just had time on our hands. Eventually we started looking at some preliminary results to try and predict the structure, and one of the students said, ‘Hey, there are holes in it.’” When Kitagawa saw the honeycomb-like network structure, he noticed there are regular array of cavities. Kitagawa instantly made up his mind.

“Most coordination chemists were looking only at the frameworks themselves of the polymers, and paid no attention to the interstices. But I thought those totally empty spaces were something interesting.” That was the moment when his research focus made a crucial shift.

Nonetheless, it would be some time before he arrived at the idea of “porous materials.” Solvent molecules within the pores play an important role in the stability of the crystal, and their removal would cause the framework to collapse. “I wasn’t thinking at first about utilizing the pores.” After two years of trial and error, on the idea that these molecules could be removed and leave a non-collapsing framework, the first porous coordination polymer was completed. Allowing gas to flow freely through the countless minute empty spaces, groundbreaking findings emerged that extended the applications of the porous structure. Yet when first published in 1997, the reception to this finding was cool. “At the time, everyone thought that ‘organic matter is soft, so a framework of porous material is not usable.’ Our work was seen as an adsorption experiment mistake and hardly believed by other scientists. It was even denounced as a lie…” Only when enough other researchers had similar findings, was it accepted that a solid pore structure can be made using organic matter. Suddenly, porous materials research became a fiercely competitive field.

Training His Students to Nurture Intuition

“When told ‘There are holes in it,’ I might have simply thought, ‘It is not an electron conducting framework, so it’s useless,’ were I the type to go strictly by the rules. From this, I may have abandoned the idea. But I had a feeling that the vacant ‘space’ was something interesting, and instead I followed the path of my intuition,” says Kitagawa.

The secrets to success, Kitagawa constantly tells his students, are luck, patience, and persistence. “Luck is not something of chance, like in a lottery. Rather it is something encountered after a person unknowingly moves toward it. The famous dictum of the bacteriologist Louis Pasteur, “Chance favors the prepared mind,” reflects this. With hard work, a foundation is built that can respond to favorable chance. Patience means not reacting quickly. A sharp person may understand phenomena quickly and immediately move forward. But I believe the opportunity to generate new fields of science comes to slower types, who pause to skeptically review the situation. Persistence is, of course, the sheer perseverance to keep believing without giving up.” When a student of Kitagawa reaches the milestone of becoming a professor, he presents them with a traditional ceramic owl – a symbol of wisdom – with these three words hand-written on it by Kitagawa himself.

When iCeMS was founded in 2007, Kitagawa was named the deputy director. There are two founding principles of the institute. “One is to describe cellular processes in terms of chemistry and create materials to control them, an aim that contributes to the medical treatment of illness or dysfunction. The other is to create functional materials inspired by cellular processes.” One of Kitagawa’s motivations is to create materials that can accomplish things that natural organisms cannot. For example, a natural cell membrane can transmit a substance both from the more concentrated side to the less concentrated side and also vice versa, yet it will not transmit all substances. “The mechanisms of life are quite well designed, but they do not function beyond their given roles. Human-designed materials may achieve additional functions.”

2017 marked twenty years since the porous coordination polymers were developed. “Our bodies are made up of various proteins that are formed from just 20 different amino acids. The body assemblage is achieved by the widely divergent combinations. Similarly, porous coordination polymers can be synthesized from the combinations of components enormously more numerous than proteins. Even the most powerful computer programs can’t compute them all for exact structures and functions. This is exactly why we find rich veins away from the main road and why we need the patience, from ‘luck, patience, persistence.’ The fun of materials science is that so much may lie buried beneath our feet.”

*This article was originally published in the newsletter “iCeMS Our World Your Future vol.6”. All the information on this page, including the researcher’s affiliation, is current at the time of publication.