In the world of science, a single discovery sometimes overturns many established notions. One such example is ABC proteins, including MDR1 protein. Professor Kazumitsu Ueda is the world’s first person to isolate the MDR1 gene. ABC proteins are important players in human physiology and health. The workings of ABC proteins have many times defied the norms of understanding shared by scientists in the field of biochemistry. Before the discovery, people around Professor Ueda criticized him for “pursuing irrelevant research”. Living by the motto “refrain from believing common notions”, he unswervingly continued his research and opened the way to uncharted territory.

“ABC proteins” are a family of proteins in cell membranes, which transport various substances. Forty-eight genes are expressed in human ABC proteins, of which MDR1 was the first in the world to be identified. Professor Ueda discovered it some 35 years ago. 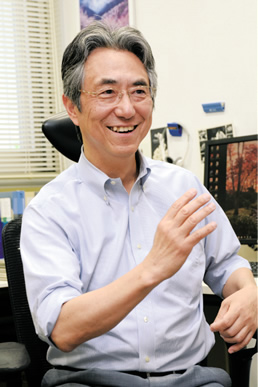 “Medication absorption greatly depends on the action of MDR1. For instance, you might have been advised not to take a certain medicine with grapefruit juice. The reason is that furanocoumarin, a compound contained in grapefruit, inhibits the medication pumping function of MDR1, which results in the small intestine’s overabsorption of the drug. If a blood pressure-lowering drug effect becomes excessively strong, for instance, it is life-threatening.” Professor Ueda’s speaks gently in a low voice, invoking a medical doctor’s sense of security.
MDR1 acts not only on medications, but also on the absorption of nutrients from everyday food. Nutrients are absorbed by the small intestine, carried to the liver, and transported to cells via blood flow throughout the body. The risk of absorbing lipid-soluble toxic compounds, such as alkaloids produced by plants and microorganisms, is present during this process.
Using energy, MDR1 exports hazardous substances that have entered cells. For example, MDR1 wards off disease by preventing the small intestine’s absorption of various lipid-soluble harmful substances from food. MDR1 is also active in brains and testes, preventing harmful substances from entering these important organs.
“Before the discovery of MDR1, the conventional notion was that harmful substances were detoxified by the liver. However, its discovery revealed that we maintain good health largely due to the function of MDR1, alongside the liver’s detoxication action. All living things, from microorganisms to plants and to animals, possess ABC proteins, including MDR1. Upon emerging as single cells, it is thought that living organisms acquired MDR1 to prevent lipid-soluble harmful substances present in their environment from entering the cell. Since MDR1’s discovery, many other structurally similar proteins have been found, also grouped into the ABC protein family.

Professor Ueda discovered the MDR1 gene when he studied in the United States for two years from 1985. Before then, he had worked at the Graduate School of Agriculture, Kyoto University, researching the actions of anti-cancer drugs on DNA. He was specifically interested in the multidrug resistance of cancer. At the time, the loss of the efficacy of anti-cancer drugs with the recurrence of cancer several years post-surgery posed a problem. In these instances, anti-cancer drugs that had not been used during prior treatment also lost their efficacy. Multidrug resistance was implicated in more than 90% of deaths caused by cancer. Clarification of the mechanisms of multidrug resistance was urgently necessary.
“After I earned my Ph.D., I heard that the U.S. National Cancer Institute was looking for postdoctoral fellows. In the 1980s, the technique of cultivating human cells in petri dishes was established in the United States, enabling researchers to cultivate multidrug-resistant cancer cells. I thought this presented a chance for me to discover something new.” Ueda grabbed this chance and left for America.
While working on team research tasks, he one day noticed that a certain gene was overexpressed in multidrug-resistant cells. It was a membrane protein gene. On the chance of encountering something important, he promoted the gene’s expression and observed that by using energy, the expressed protein pumped a lipid-soluble anti-cancer drug out of the cell. All institute members were wide-eyed. No one had thought that energy would be expended to remove membrane-permeating lipid-soluble compounds from the cell.
Before this discovery, many people doubted the research direction pursued by Professor Ueda. They thought that anti-cancer drug resistance was caused by too many genes and mechanisms, which would remain unsolved unless a vast number of genes were studied. Their views were quite understandable in light of the basic idea that biochemical reactions show high substrate specificity. For example, metabolic enzymes recognize specific sugars and amino acids. A one-on-one recognition mechanism was thought to exist in biochemical reactions. Notwithstanding this, Professor Ueda and other researchers witnessed a single transporter pumping various types of compounds out of cells. The transporter used the common characteristic of lipid solubility to recognize the compounds. “No one imagined the existence of a transporter like this. I was extremely lucky.” The expressed gene was named MDR1, using an acronym for multidrug resistance.

His Research Mindset Originated on the Silk Road

“Believe not blindly in common notions” is Professor Ueda’s motto. He cultivated this research mindset when he studied at the Faculty of Agriculture, Kyoto University. “At the time, it was popular to travel with a backpack. Many young Japanese people set out across the sea. Driven by this trend, and with an admiration for the Silk Road, I visited Turkey via the USSR and then traveled to Iran, Afghanistan, Pakistan, and India.” He made a three-month penniless travel, overland by bus and train.
He saw directly that different countries, areas, and ethnic groups had quite different ways of thinking and customs. More than a few times, he experienced that norms in Japan went against the common notions of other ethnic groups. Departing from the norm, he quickly acquired a clearer view. “Being skeptical about common notions is an essential attitude for scientists. At a press conference when he won a Nobel Prize, Professor Tasuku Honjo said, ‘Do not always believe what textbooks say’. Common scientific notions can dramatically change after one discovery. I was criticized by many forerunners. However, I came across the unknown after a steady, continuous research effort.”
Since the discovery of the MDR1 gene, Professor Ueda has spent nearly 30 years working on elucidating MDR1 structure by thoroughly rejecting unproven assumptions and examining every conceivable hypothesis. Gradually he is shifting his research focus to other ABC proteins, based on his work with MDR1. One example is ABCA1 protein, essential in forming high-density lipoprotein (HDL) cholesterol (good cholesterol). People with high HDL cholesterol levels are less prone to arteriosclerosis, and he believes that tracking down the mechanism of ABCA1 formation of HDL cholesterol will lead to the prevention of myocardial infarction and other heart failures, as well as cerebral strokes.

A Quest for the Most Interesting

In March 2019, after many years of service, Professor Ueda hit retirement age for the Graduate of School of Agriculture at Kyoto University. As a student, he affiliated with several schools, enrolling in the engineering faculty of another university and then the Department of Forest Science, the Faculty of Agriculture at Kyoto University. Finally, he selected the Department of Agricultural Chemistry, the Faculty of Agriculture.
He took a roundabout path because he wanted to know “what I would be good at and what fascinated me”. At the engineering faculty, he was not interested in manufacturing; and at the Department of Forest Science, he could not memorize tree names, so he gave up. While still undecided, he by chance read Chance and Necessity published by Jacques Monod, a French molecular biologist. Ueda instantly became captured by the study of DNA. “DNA research required only remembering names for four nucleic acids and 20 amino acids. The subject was best suited to an individual like me who was not confident in memory retention (laugh).” After he enrolled in the Department of Agricultural Chemistry, every day became exciting and 40 years passed like an arrow.
Subsequently in April 2019, Professor Ueda was invited to become a Program-Specific Professor at iCeMS, where he had long worked as a Principal Investigator while concurrently serving for the Faculty/Graduate School of Agriculture. He was even involved in setting up the institute as a founding member. Because he knows of the confusion during a hectic budding period, he is happy with the institute’s current environment that fosters young researchers. “This is my restart, as I turn over a new leaf. Although I am not sure how long I can continue research, my curiosity for wanting to know what it is to be living is inexhaustible. The mechanisms of living organisms are profoundly complex and diverse. Humans, monkeys, and mice appear similar to each other in some respects, but they are actually different. They have evolved bodies best suited for their respective environments. As such, studying mice, however much insight it provides, can never be enough to understand humans. Even seemingly familiar things may reveal completely different aspects from a different angle. Discoveries may be gained by coincidence. You may pick up a stone at your feet and discover a valuable fossil. Research is like that. It excites me, so I cannot retire from it. At iCeMS, young talented researchers find many new challenges, and their activities flourish in various ways. I also continue to meet the challenge of overturning what is taken for granted.”

*This article was originally published in the newsletter “iCeMS Our World Your Future vol.8”. All the information on this page, including the researcher’s affiliation, is current at the time of publication.