Dr Yu is a Research Associate in the Namasivayam lab at iCeMS. His research focuses on advancing small-molecule genetic switch technology for regulation of therapeutically important genes on demand, with the ultimate goal of using this approach to treat rare diseases. Here, he constructed a new type of epigenetically active, cooperative DNA binding system encompassing key gene-regulatory factors. This new type of molecule, ePIP–HoGu, not only mimics the operation of pairs of transcription factors, but also recruits epigenetic modifiers to particular DNA loci. 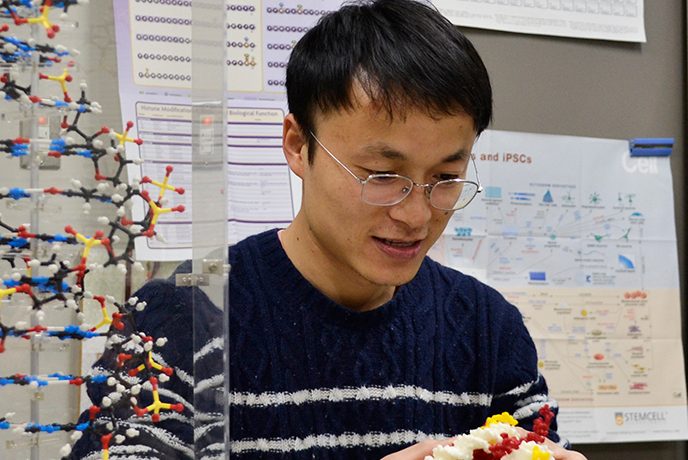 Please share with us the significance of your manuscript in terms of its research achievements, impact, or uniqueness.

There are two key considerations when designing small-molecule genetic switches: DNA sequence specificity and epigenetic modifying potential. This study tackled these two issues in one finely tuned system: ePIP-HoGu. First, we upgraded the cooperative DNA binding system PIP-HoGu with a host molecule Cucurbit[7]uril (CB7) because CB7 exhibits ultra-tight host–guest interactions and functional properties, aspects that are essential for the next advanced system. Through a combination of PIP-HoGu and epigenetic regulators, we proved that the advanced system ePIP-HoGu cooperatively binds to its recognition sites and efficiently acetylates nearby nucleosomes.

What would you say is the most exciting or “I made it!” moment during this research project?

One small molecule can be pluripotent enough to fulfill multiple functions that work together. The chemical combination of different systems was less challenging than conceiving the idea and validating its biological feasibility and effectiveness. To simplify the assay, I carried out several rounds of optimization in vitro. After preliminary selection of the evaluation system, I finally obtained a positive result. Once the system was established, I was able to play around with it and confirm its efficacy. That was my ‘eureka moment.’

Please tell us about the biggest challenge or problem you experienced while conducting your research. How did you overcome it?

In this research, I need to operate in a sequential, step-by-step manner. This study sought to combine two previously established systems, including two cooperative PIP systems (PIP-HoGu and PIP-NaCo, developed by myself) and PIP-Epi-drug. The chemical combination of these two systems was less challenging than conceiving the idea and validating its biological feasibility and effectiveness. This required a finely tuned evaluation system that could directly and specifically report positive results. At the same time, the system needed to be sensitive enough to reflect even subtle positive responses, as this novel system is only at the prototype stage. We tested two systems, in vitro and cell-based, and ultimately continued our evaluations in a previously established in vitro system, i.e., the in vitro epigenetic assay. To improve the positive response, we made several modifications to the system, optimizing the PIP binding length, gap distance, and repeat binding sites; in addition, we performed control studies.

Yes, I believe it is a cornerstone in the development of an artificial small-molecule genetic switch. Previous research utilized the PIP-Epi-drug and Cooperative PIPs systems separately. By contrast, in this study we combined the two most important gene-regulatory components into one system, thereby closely mimicking the natural epigenetic code that regulates gene expression in a living cell. In future research, we will focus on optimization and application of our approach in cell lines with rare genetic disorders, which could represent a major turning point for the use of artificial small-molecule genetic switches.

Please describe the current situation of your career. What is your current position? How has the knowledge and experience gained at iCeMS influencing your career?

I am currently in the verge of completing the use of my system to target Huntington disease. Dating back to my doctoral course studies, I have actively attended iCeMS events over the last 4 years. Without a doubt, I matured quickly in the exciting international atmosphere at iCeMS. The institution attracts so many researchers from Japan and abroad, and has always been eager to encourage communication and collaboration by frequently hosting academic seminars, iCeMS retreats, public events, and international overseas programs. I became more confident about discussing science with others, and was always able to catch up on the latest ideas. iCeMS is always encouraging young researchers to broaden their academic relationships. In the last September, I was supported by the iCeMS international oversea program to visit the United Kingdom for 1-month collaborative research and academic exchanges, which will help me continue my future research career.

*All the information on this page, including the researcher’s affiliation, is current at the time of the interview.