Pursuing the unelucidated structure of beauty

Our brain contains about 86 billion neurons and more than tenfold this number of glial cells, which create a complicated neural circuit. In recent years, by developing cell visualization methods, the process and mechanisms of neural circuit formation have been gradually clarified. Professor Kengaku seeks to understand the mechanism behind how the brain is constructed by studying the dynamic movement of developing neurons.

“This is a deep world, like a universe. I think it is so beautiful.” Kengaku refers to neither a glittering jewel nor the works of famous artists. She speaks of a Purkinje cell, orderly located in the cerebellum. “As when people walk through a crowd without hitting others, neurons stretch to make way for others. In the end, they create a tissue that looks like a peacock with open feathers. Each cell acts with consideration and propriety, like a human. When I see the world through a fluorescent microscope, I find new things.” She cannot keep cool when talking about her research. Kengaku joined iCeMS in October 2008 as a project leader. She works with young researchers and throws herself into it every day. “I always cooperate with students and other researchers. By arguing with one another, we advance only with struggle. Sometimes I am surprised by what my colleagues find, and it motivates me. By respecting each other’s ideas and personalities, we make new discoveries. This is my job.” With this gentle attitude, Kengaku shows a feeling of pride. She has achieved many results, but as a youth, she did not aim to become a researcher. 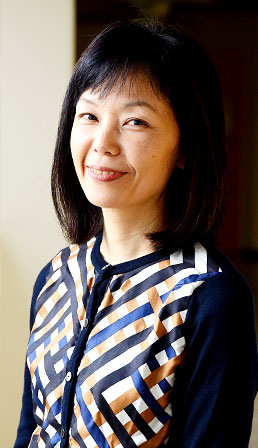 Born in Tokyo. Received a PhD in 1995 from the University of Tokyo Graduate School of Medicine. Held the positions of Postdoctoral Research Fellow with the Department of Genetics at Harvard Medical School, Assistant Professor and Junior Associate Professor of Neurobiology with the Department of Biophysics at Kyoto University, a Team Leader at RIKEN Brain Science Institute, and of Associate Professor with iCeMS. Has been at her current position since 2012.

Connecting with nature as a young person

When young, Kengaku lived in Higashikurume, a suburb of Tokyo. There, she developed a fondness for nature. She ran in nearby mountains, chased insects or frogs until dark, caught and observed wild creatures, and read encyclopedia of animals at night. Their behaviors and shapes attracted her, and she gradually began to admire jobs related to animals. “Should I be a veterinarian? Or have a job protecting wildlife?” She imagined her own future, but couldn’t decide on an occupation.
Kengaku decided to explore various fields, so she chose the University of Tokyo, where students don’t have to commit to their faculty upon entering. “I noticed that I was more interested in pursuing undiscovered truths than something already known. I wanted to know the workings of life and the structure of living things more fully, so I chose the department of Biological Sciences, Faculty of Science.” She was especially curious about the functions of nerves. In physiology class, extracting the giant axons of squid and measuring the organ potential of electric rays absorbed her. “I thought that if I knew the mechanisms of nerves, I could unravel the mystery of creatures’ action patterns.”

The joy of discovery led to becoming a researcher

At graduate school, she conducted experiments until the last train every night. In those days she researched neural differentiation. The nervous system is an organ that stretches from a creature’s head to tail. In the nervous system, neural tubes divide into sections, and each section organizes into the spinal cord, cerebrum, cerebellum and other parts. While humans have a large number of genes, about 22,000, this number cannot clarify the mechanism of complex neural tube differentiation. During her graduate school, this mechanism was not yet unraveled. The only thing already clarified was that neural tubes gradually become nerves through exposure to certain protein molecules. Knowing this, she put protein molecules called FGF on the undifferentiated embryonic cells of a clawed frog, changing the concentration gradually. She noticed that embryonic cells turned into different parts of the brain with different concentrations. “The parts exposed to strong FGF concentrations became spinal cord, and those exposed to weaker FGF concentrations became the frontal brain. When I found this pattern, I got so excited that my leg trembled.”
Science is competitive. As a project leader, Kengaku bears the responsibility of success. Even with new findings, she feels more relieved than happy. “Graduate school was a treasure for me. Finding something big with a pure mind becomes a moment you’ll never forget.” This experience led her to decide to be a researcher.

The reality and the ideal that women researchers face

While her passion for research grew, her path was full of setbacks. In those days, women researchers in Japan faced barriers too high to overcome. “Now, many people say that women should work like men, but it was a male-dominated society at that time. There were many laboratories that didn’t hire women at all.” Intrusive thoughts always assailed her, such as “I have to give up my research before long”, but she couldn’t give up easily. Kengaku followed her interest, and she decided on a post-doctorate at Harvard University.
Surprisingly, half of the laboratory members were women. “I found myself shut in a small world. They considered science as the one thing they lived for. By them, I felt pushed to continue researching what interested me.”
After returning to Japan, Kengaku was invited to Kyoto University by Tomoo Hirano, one of her seniors in graduate school. “I think Kyoto University is a research mecca. Many unique and famous researchers come here. After Kyoto University, I moved other places, but I wanted to return because my husband was still in Kyoto. Fortunately, iCeMS prepared the position of project leader, allowing Kyoto to challenge me again.”

Treasuring the curiosity to know

This is her ninth year at iCeMS. While Kengaku is still crazy about research, she also values life balance. “It is hard to be successful at both research and private life. Cooking for and eating with my son is the most enjoyable time for me to think about this nutritive balance.” These days, she cannot research from morning to night. However, with a family she can return to her roots and focus on the unsolved questions she wants to research.
“Many young researchers tend to focus on a fast way to help people, researching drug discoveries or a cause of disease. Of course, this is very important. However, if you pay attention to social needs too much, you’ll lose what really interests you. I hope young researchers follow what they want to know and value the ambition to find new things. Creating new knowledge is helpful for the future of humanity.”

*This article was originally published in the newsletter “iCeMS Our World Your Future vol.5”. All the information on this page, including the researcher’s affiliation, is current at the time of publication.