Expressing the mysteries of nature in astonishing new ways

The process by which cells proliferate and differentiate, growing from a fertilized egg into an organism body, is called “development”. In the process, cells push and shove within the growing body, exerting force against one another. With the clarification of the chemical signaling pathways that control development, researchers turn to the question of how mechanical forces affect the shapes of organisms. Associate Professor Kaoru Sugimura’s work is devoted to unraveling the mysteries of living organisms, a quest that centers on the “mechanical force in living things”, as she gleans from a wide variety of fields, including imaging technology, soft matter physics, and mathematical statistics.

“This is live-cell imaging of a fruit fly wing,” says Sugimura, as she turns the laptop on her desk to face us. The screen shows a fly wing taking form. Countless shining cells slowly migrate from the tip toward the body of the wing. The fantastic sight recalls the Milky Way twinkling in the night sky. “Fruit fly wings help us understand the fundamental logic of development. I’ve been using fruit flies for experiments and mathematical modeling since my student days. Collecting quantitative data is indispensable for my research, and flies are an outstanding tool for quantitative study of genetics and development. They are also easy to analyze. And so…. ” Her words speed up as her voice rises. The flies that gather around kitchen garbage might just annoy most people, but for Sugimura, they are special creatures that support her research. The way she talks about them gives us a sense that she sees them as more than experimental organisms - that she may actually feel affection for them, allowing some genuine feeling to filter through her scientific work. Where might this have come from? 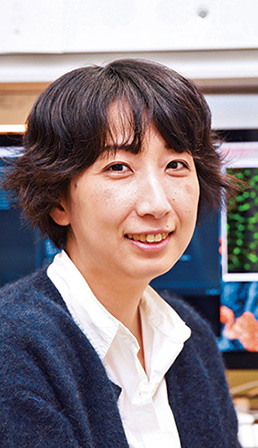 Born in 1978 in Hyogo Prefecture. PhD, Graduate School of Science, Kyoto University. After working as a JSPS Research Fellow and RIKEN Postdoctoral Researcher, she served as an iCeMS Assistant Professor. In 2017, she took up her present post.

Image of a fruit fly wing, in which E-cadherin is labeled with GFP：A wing in the pupal stage. Observation of cell movement is enabled by fluorescently labeled E-cadherin, cell adhesion molecules. A pulling force acts from the body (left), and in response, cell groups flow from right to left.

As a little girl, Sugimura was a bookworm. She would lose herself in endless books about anything that caught her fancy, from space and science to dinosaurs and stories. She had no interest in the toys and dolls that held the attention of girls around her, but she would beg her parents to buy her books. Spreading the wings of her imagination, she voyaged far through reading. “I wanted to grow up to be someone who expressed what the world is like. Sometimes I thought about being a writer or a film director, although, even as a child, I suspected my talents did not lie in those directions. ”
The turning point in her interest was a science class in middle school. Sugimura was totally absorbed even by simple experiments, such as observing a rolling ball or a swinging pendulum. “I was in a group of four girls doing experiments, and the other three weren’t interested at all. But I got really excited. I thought to myself, this is something I could keep doing. ”
At first, it was physics and chemistry that held her interest. Compared to the physical sciences, where problems are precisely solved with mathematical formulas, biology seemed ambiguous and vague and therefore completely uninteresting. “Then during the summer break in my first year of high school, I happened to read a book about the beginnings of molecular biology, and the scales fell from my eyes. The workings of living organisms could be explained in logical terms! My inclination shifted 180 degrees. I suddenly knew I wanted to study biology from the perspective of physics, and it filled me with excitement. ”

An innovative method of quantitative research

About ten years later, as a researcher at RIKEN, she entered the emerging field of mechanobiology, a fusion of biology and physics. “In graduate school, I used live-cell imaging and molecular genetics to analyze the mechanisms of nerve cell dendrites. Just before finishing my PhD, I attempted a mathematical model of dendrite formation based on my own experimental observations. For this, I had to incorporate information from a variety of scientific fields. Later, through interactions with many scientists, including my current collaborator, I realized that mechanical force plays an important role in the process of development. ” At that time, very little progress had been made in understanding this aspect of development, as the mechanics of biological tissue were still largely unknown. She plunged wholeheartedly into elucidating them.
Sugimura collaborated with Shuji Ishihara, an associate professor at the University of Tokyo, to measure physical forces in cells. They worked not by applying external force, but by visually quantifying the force received by individual cells. They established “Bayesian force inference” to estimate relative values of tension in surfaces contacted by other cells and pressures on the cells. “Simply put, the technique estimates the forces acting on cells by analyzing cell shapes in images. When force is applied to something, its shape changes. We set out to measure that force based on information from the shape, reversing the cause and effect relationship. With other methods, like using optical tweezers that apply external forces to cells, detailed information is obtained, though for relatively far fewer cells. With our method, although an estimate, the visual data measures some 20,000 cells at one time. ” Sugimura and her colleague devised this method by combining a mathematical statistics approach to physics and biology. This resulted in an innovative method of quantitative research and an original way to “express” the mechanisms of life.

The mysteries of life are still quite profound

The results of her research at RIKEN were recognized, and in April 2011, Sugimura became a member of iCeMS. Ever since that first aspiration to be a scientist in middle school, she has had an inquisitive mind. “I want to uniquely express the mysteries of nature through my work. This idea has always sustained my work. Expression involves some individuality, and I’m just not interested in doing the same things as others. But I’m not like a chemist who starts from scratch and creates a new material. I want to take what’s already in the natural world and express it in a way that anybody can understand. ”
The mysteries of living organisms are still quite profound. For example, the DNA contained in the nucleus of each human cell has a string-like shape, and when uncoiled, it is about two meters long. That is, packed inside a nucleus just ten micrometers in diameter is DNA about as long as a person is tall. Furthermore, rather than haphazardly crammed into the nucleus in the way we might stuff a closet, each type of cell, like muscle cells or nerve cells, has a characteristic arrangement. “Doesn’t that make you wonder what it’s all about? We can’t elucidate even such basic mechanisms of life. If we bring together knowledge and ideas from, not only biology and physics, but various other fields as well, and if we investigate thoroughly, then hopefully we will understand what make living matter unique. I want to express the mechanisms of life from an original viewpoint that will astonish everyone. ”

*This article was originally published in the newsletter “iCeMS Our World Your Future vol.7”. All the information on this page, including the researcher’s affiliation, is current at the time of publication.