Stem cells, found in almost all multicellular organisms, have the ability to turn into different types of cells in the body. Stem cells are believed to have played an important role in the evolution of multicellular organism from ancient single-cell organisms that date back roughly a billion years.
iCeMS has been researching basic stem cell biology from a wide variety of perspectives since its inception in 2007. Dr Kouichi Hasegawa tells us about iCeMS stem cell research.

Program-Specific Research Center Junior Associate Professor
Born in Kumamoto, Japan, in 1972. In his current position since 2017. He received his PhD degree in 2000 from Kwansei Gakuin University Graduate School of Science. He served as an assistant professor at University of Southern California, US, an assistant investigator at the Institute for Stem Cell Biology and Regenerative Medicine, India, and as a senior fellow at the University of Melbourne, Australia. He also serves as a scientific advisor to several biotech startups. 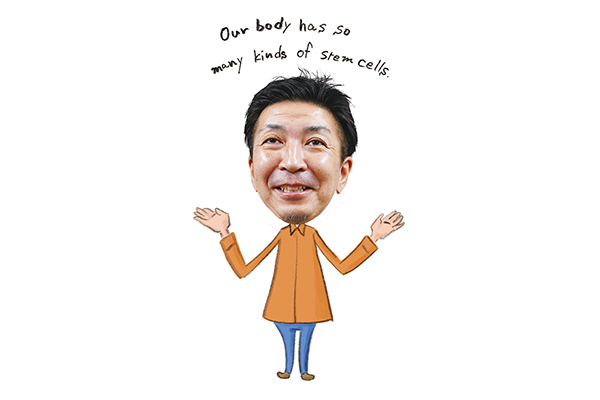 The human body contains an estimated 37 trillion cells, categorized into more than 200 different types. These vast numbers of cells can be traced back to a single cell, the fertilized egg. In the mother's womb, the fertilized egg undergoes repeated cell division and produces stem cells, which are the source of all tissues and organs, each with their own specialized physiological functions.
Let’s have a look at the enigmatic nature of stem cells.

The key features of the stem cell include its power to duplicate itself and its ability to produce other cell types. While the stem cell can make multiple copies of itself without losing its potential (self-renewal), it also has the potential to turn into a different type of cell (differentiation). For example, the fertilized egg produces skin, nerve, liver, and many other types of cells while undergoing repeated cell division.

Tissue (Adult) Stem Cells Are Present in and Supporting our Body

It is sometimes incorrectly thought that stem cells are a man-made tool for regenerative medicine and other cutting-edge science. The truth is that even after birth, the human body naturally contains tissue or adult stem cells (as opposed to embryonic stem cells).
There are various types of adult stem cells, including hematopoietic (blood-producing) and neural stem cells. The former are progenitors for red blood cells, white blood cells, platelets, and many other blood components, while the latter produce neurons. Adult stem cells are present in a population of differentiated cells for the purpose of maintenance and repair. When you fall and scratch the skin on your knee; epidermal stem cells there are able to heal the skin in a few weeks.

The term “pluripotency” refers to the ability of a cell to generate all of an organism’s somatic cells. Unlike adult stem cells, embryonic stem (ES) cells and induced pluripotent stem (iPS) cells are pluripotent because they can differentiate into all types of cells in our body.

ES cells are derived from the inner cell mass of blastocyst-stage embryos. The harvested cells are cultured to establish ES cell lines. Following the 1981 establishment of the first mouse ES cell line, the first human ES cell line was developed in 1998. In Japan, the first human ES cell line was established by the Kyoto University team led by Prof Nakatsuji (iCeMS founding director). Subsequent technological developments have made it possible to stably cultivate this cell line, allowing for its wide application in medicine and biology. Many years of research on pluripotent ES cells gave rise to iPS cells.

Prof Shinya Yamanaka of Kyoto University and his colleagues were the first to announce in 2006 the induction of iPS cells from mouse fibroblasts. Pluripotent iPS cells can be induced from somatic cells (eg, skin and blood cells) by introducing a key set of ES cell genes. The iPS cell technology can be applied to regenerate neural, myocardial, and other tissues damaged or lost because of an illness or accident. In addition, this technology can be applied to somatic cells taken from a patient with an intractable illness, and then used to reproduce the disease condition in culture dish. Comparison between diseased and healthy cells may help discover the pathology and its treatment. Prof Yamanaka was one of the founding members of iCeMS. After becoming the CiRA director in 2010, he continued to serve iCeMS as a Principal Investigator until March 2016.

iCeMS encourages transdisciplinary research activities, and researchers with different backgrounds enjoy its vibrant and friendly research culture. Dr Hasegawa works with Dr Kamei and many other experts in his stem cell research projects. They actively support one another by exchanging input and experimental materials.

Visiting Prof Atsushi Nakano (cardiophysiology) and Dr Daniel Packwood (applied mathematics) from iCeMS are working together to understand how the heart develops from the cells in the embryo.
The figure below is like a ‘map’ of the different cells in the heart. Each point corresponds to one cell, and the points are placed according to their gene expression. From this plot, we can identify different types of cells (indicated by the colors). By determining which of these cell types arise from which parts of the embryo, we can obtain useful insights into heart development. 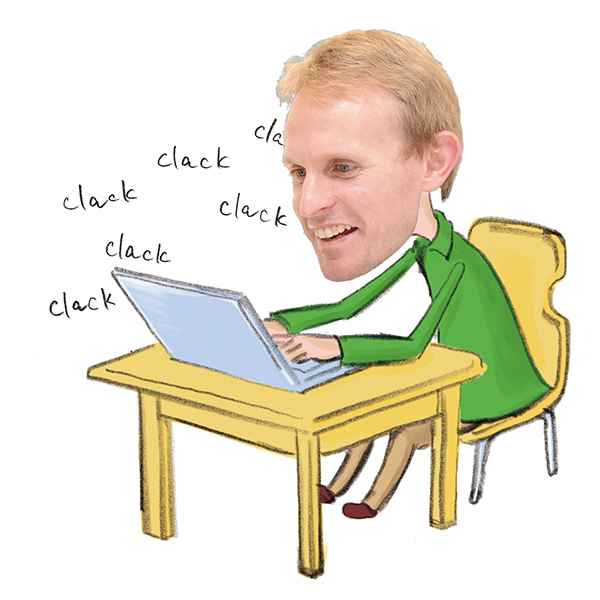 Prof Norio Nakatsuji is the founding director of iCeMS. He was the first to create the simian and human ES cell lines in Japan, and established the standard human ES cell culture system. As a leading pioneer in this field, he advanced ES cell-based drug and cell therapy research and development.
When iCeMS was launched in 2007, Prof Nakatsuji focused on stem cell control using meso-scale (5–100 nm) materials. He was looking for ways to use novel substances and materials that have interesting biological properties.

Unlocking the mystery of stem cells
How they remain undifferentiated

Undifferentiated stem cells undergo self-renewal and differentiation when triggered by external signals, but the mechanism of this signaling remains unknown.
Our lab is investigating what and how external information is transmitted to inside of the stem cell to regulate these processes. Information on this control mechanism will shed light on how to maintain stem cells undifferentiated, expand them efficiently and induce their differentiation to particular cell types of interest.
Basic stem cell research can open the door to new drugs and other therapeutics.

An example of applied research!

Developing a low-cost culturing medium
Culturing iPS and ES cells requires a large amount of medium. The use of expensive medium is a bottleneck in the cost of iPS cell research. We have developed a novel synthetic medium at a five- to ten-fold lower cost for expanding iPS and ES cells.

The human brain is a network of billions of communicating neurons that regulate conscious and unconscious behaviors. Neurons are orderly arranged in the cortex, multilayered cell architecture, where they establish precise synaptic connections with their specific targets. At our lab we directly observe the brain development process to elucidate the principle underlying it. The fetal brain has a layer of proliferating stem cells. These stem cells repeat cell division and sometimes produce neurons. Neurons leave the germinal layer of proliferating stem cells and migrate through tissues and stack up to form the cortex.
Abnormal neuronal migration is associated with epilepsy, mental retardation, ataxia, and other neurological disorders. We reproduce the neuronal migration process on glass plates to analyze the underlying dynamics. 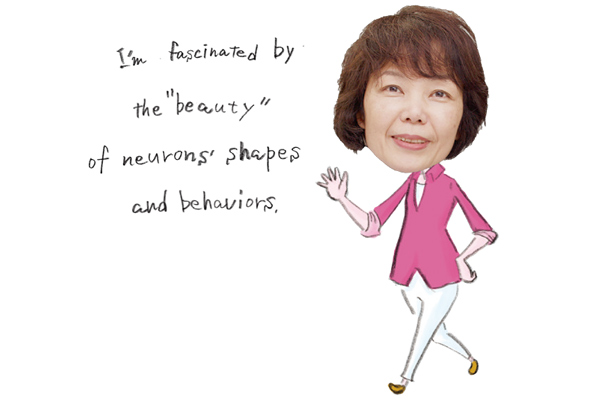 Our lab is working on a “Body-on-a-Chip (BoC)” device. This microchip device is designed to simulate biological reactions by encapsulating iPS cells and differentiating them to variety of tissues including liver, heart, and others, and these tissues are connected by vessels similar to human body. iPS cells derived from an individual will enable us to produce tissues in a BoC that possess his or her genetic traits.
This BoC, which miniaturizes living organisms' responses, can be useful for physiological, pathological, and therapeutic studies. 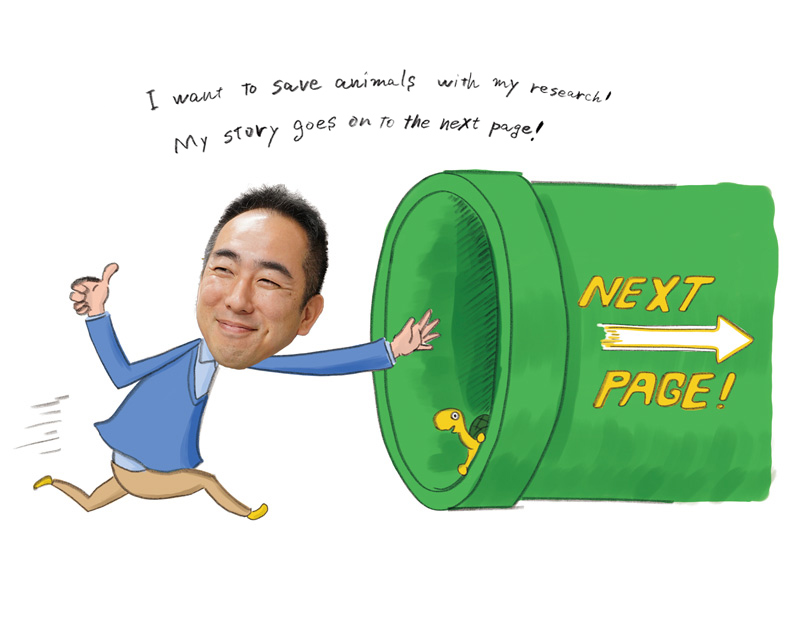