Human cells number around 37.2 trillion. Of these, around 10 billion expire every day. As they die, they signal “eat me”, a message sensed by white blood cells known as macrophages. If macrophages fail to eat the dying cells, dead cells will rupture, causing autoimmune diseases. Mysteries, including how signals are presented and sensed, still surround this important process. Professor Suzuki and his group are moving forward with their elucidation.

“My research investigates on biological phenomenon at the cellular level to find mechanisms. I was so happy when I found out how cell functions were regulated...” Suzuki talked cheerfully, looking like a child finding a new game. 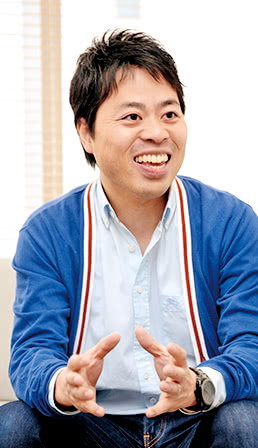 Born in 1977 in Amagasaki Hyogo. Went to University of Victoria in New Zealand for research in 1999. Received a PhD in 2007 from Osaka University’s Graduate School of Medicine. Held the position of Research Fellow with Department of Medical Chemistry, Kyoto University Graduate School of Medicine from 2007 to 2015. Remained in his present position since 2017, after working for the Immunology Frontier Research Center at Osaka University.

“As a student, I wasn’t enthusiastic about anything”. Suzuki seemed embarrassed when he thought back. “In my high school days, I formed my own band, and at the same time I prepared for examinations, but I couldn’t concentrate on either.” At the university, Suzuki was not a diligent student. But then, two turning points occurred.
The first was studying with Professor Sumiko Gamo, a genetic researcher. Suzuki was lucky to receive one-on-one lessons. “The class was excellent. She covered a wide range of topics, such as the history of science and the origins of genetics.” He gradually gained interest in life sciences. One day he told Gamo that he would like to study abroad, and she pointed him to an exchange program. He immediately wrote a proposal and was accepted to travel to New Zealand.

His research theme while in New Zealand was the relationship between alcoholism and genes. He learned that people’s ability to drink relates to the variation of alcohol-metabolizing enzymes. From this, his desire to learn not only the connection between a gene and a disease, but also the biological phenomenon, grew.
Suzuki developed a “learning attitude” from students around in New Zealand. “Many students took out loans, and if they failed a class, they had to pay for the same class again. Laziness means a matter of life.” Interacting with such enthusiastic students, he found the fun of research. This was the second turning point for Suzuki.
As an aspiring researcher after his experience in New Zealand, what he valued was “whether I find it interesting or not. After returning to Japan, I decided to follow researchers who use interesting methods. Professor Shigekazu Nagata of Osaka university, has already produced many achievements about cell death. In his methods, he first observes a phenomenon and then examines a related gene.” Suzuki found this research method in line with his way of thinking. Following Nagata’s method, he asked himself what topic would be interesting. He decided to investigate the “eat me” signal, found many years ago but with no mechanisms elucidated.
Suzuki worked for ten years under Nagata. He gradually began to consider launching new projects in a new place. “The boy raised by his parent wishes to leave home and stand on his own feet. My feeling was something like this.” At just the right moment, Suzuki formed a connection with iCeMS and came to Kyoto.

Rethinking the importance of research

Suzuki always found himself in the laboratory conducting experiments, except when he had to leave for business trips. “I don’t stick to my idea. If there is a truth under the experimental data, we may encounter unexpected findings. We can also uncover truth when we conduct an experiment many times. While I’m very happy when I can conduct research as expected, I think correcting the gap between my idea and experimental data is also interesting. If possible, I want to always conduct experiments.” As moving into leadership, Suzuki felt a little sad to move away from experiments.
On the other hand, he finds it worthwhile to work as a leader. “Students and postdocs conduct experiments, and their enthusiasm is essential. Last-moment efforts can lead to the important findings. No matter if the experiment is successfull or not researchers can persist if they have experiences to bring them enthusiasm. I also have some precious experiences when I didn’t give up. My job is to create the environment where students can make their final pushes.”

Ask the ancients for new truth

Suzuki expresses his research as “Onkochishin: we ask the ancients about modern affairs.” The “eat me” signal of dead cells to macrophages was found about 25 years ago, but people didn’t have the experimental techniques to investigate further. “Cancer and iPS cells tend to become topics of conversation in society. However, if you shift your point of view, you will notice a lot of interesting biological phenomenon that remained unsolved.” The same signal was also found in the blood clotting process, and it is expected that understanding these will help find causes of genetic diseases, such as muscular dystrophy and spinocerebellar degeneration. “With advanced experimental techniques, you can find unexpected connections between biological phenomenon and diseases that have not been investigated enough. “It would be so interesting if our own research is considered as cutting-edge science many years from now.”

*This article was originally published in the newsletter “iCeMS Our World Your Future vol.4”. All the information on this page, including the researcher’s affiliation, is current at the time of publication.